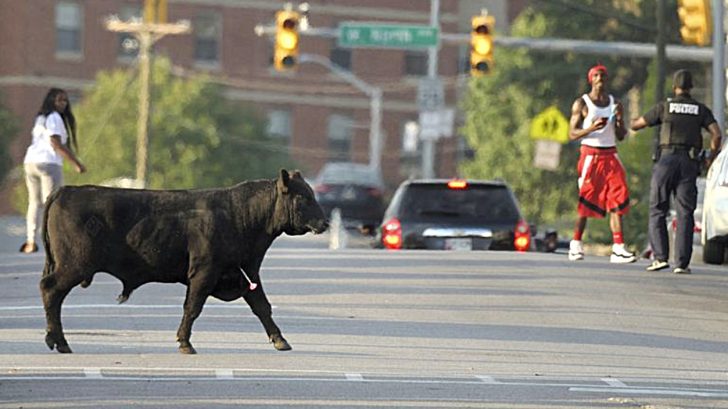 Massive Bull On The Loose

As the good people of Baltimore were doing their best to commute to work the other day the last thing they needed was a 1,600-pound bull blocking traffic for hours. Well, that’s exactly what happened.

ONLY IN BALTIMORE A COW RUNNING ON NORTH AVE ????? pic.twitter.com/xXRX6EsR7A

According to the Baltimore Police, the bull was on its way to a farm in Frederick County when it escaped from a truck that was at a stoplight around 3 pm. The bull ran onto the streets of West Baltimore for a few hours jumping in front of cars and scaring people away.

The officials eventually had to call the Maryland Zoo who assisted by sending in a crew of employees to help quarantine the bull and tranquilize it. For a solid three hours, they chased the bull around town and shot it with three tranquilizers before it finally stopped.

Everyone Was Happy He Was Captured

The owner Scott Barao said he’s an expensive bull that means a lot to his family and was just happy they didn’t shoot it. All he wanted to do was get it back in the truck and get to where they were going so he could provide for his family.

Barao, executive director from Hedgeapples Farm, where the bull was raised also spoke out saying, “They could’ve shot that bull two hours ago and been done with it. He’s extremely valuable to us and we’re just glad to have him alive.”

They captured it and safely got it back in the truck. However, this is not the first time a bull has got loose in West Baltimore, this is the third bull this year and the seventh one since 2014.