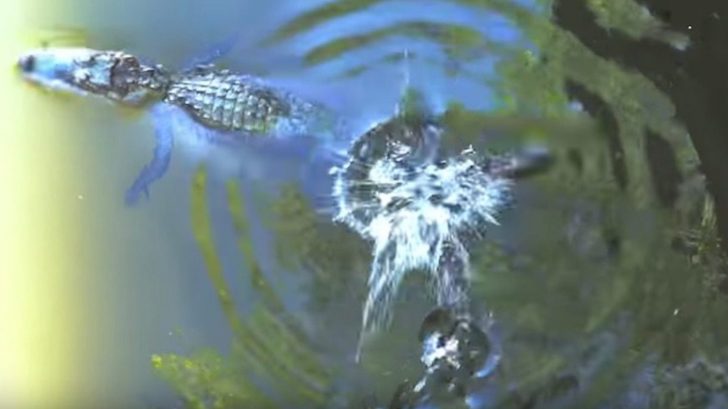 On the Trinity River in Texas lies a restaurant that sits right over the swamp and customers visiting one day got to see an epic battle between an eight-foot alligator, and the legendary alligator snapping turtle, Raphael.

For most swamplands in Texas, the alligator is the king, however, not in this specific area. Raphael has lived under the restaurant since the 1980s (50 years now) but he’s way older than that. According to Pecos Hank, the alligator snapper is about 150 years old and weighs a massive 300 pounds.

“It’s said that Raphael has lurked in the waters of this swamp since the time of Ulysses S. Grant and even Billy the Kid!” Wide Open Spaces said about the turtle.

The turtle was spotted when customers were throwing leftover food and bread crumbs down into the water for the fish to eat. The bread crumbs attracted the fish and the commotion the fish were making attracted an eight-foot alligator.

The alligator floated below the restaurant with the fish as someone threw a piece of biscuit that landed right on top of the gator’s tail. It was at this moment that onlookers noticed a massive turtle head lurking up from the depths and it was going after the biscuit.

It was Raphael the turtle, and he was on a mission. The snapper reared back and bit the alligator right on the tail, missing the biscuit. The gator freaked out and swam off at full speed to get away. Take a look at the footage capture of the incident below!