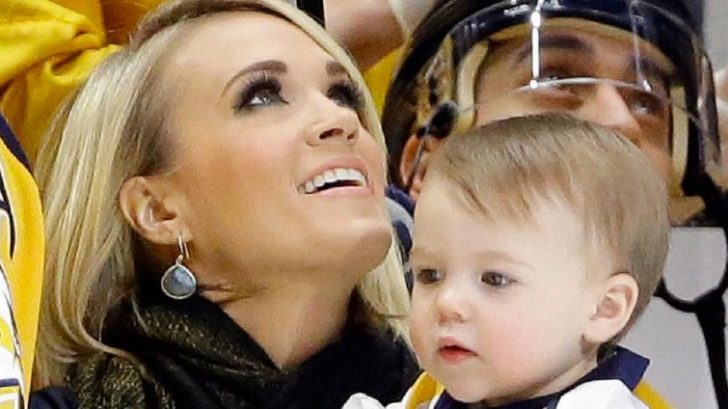 On February 27, 2015, Carrie Underwood and her husband, hockey star Mike Fisher, welcomed their son Isaiah Michael Fisher to the world.

He has made countless appearances on both parents’ social media accounts and we seriously can’t get enough of him!

Although he is adorable at all times, we’ve compiled a list of 15 times he was extra cute. Check it out below.

1. When He Made His Social Media Debut

The Predators are in the playoffs! Just waiting to get called up! #PutMeInCoach

A short month after he was born, the happy couple shared the very first photo of their little bundle of joy. And just like his dad, he was already ready to play hockey!

2. When He Smothered His Mom With Kisses

Baby kisses are the best thing in the world…I'm so thankful for my sweet angel. He makes my life better in every way! #SoInLove #MomLife #Slobber

Although they were covered in slobber, Isaiah smothered Carrie with kisses and it was the cutest thing ever!

3. When He Soaked Up The Sun

He soaks in the sunshine…and I realize that he is mine… ?☀️? I don't deserve such sweetness! #blessed #momlife

Isaiah brought the cuteness when he was hanging out with his mom outside. The look on his face as he’s soaking up the sun will put a smile on your face!

4. When He Got Every Last Bit Of Food

Enjoy it, baby boy…when you're an adult, sticking your face in the bowl to lick the bottom is "frowned upon."

Little boys need lots of food to grow up to be big and strong, and Isaiah was apparently taking this very literally when he was eating one day. How cute is he licking the bottom of his bowl?! Carrie sweetly reminded him to do this while he still can because as an adult, this action is “frowned upon.”

5. When He Pet The Family Dog, Penny

Good girl…Pa-ba (this is how he says "Penny"). I half expected these two to clash, but with lots of carefully watched playtime and working hard to teach both how to treat each other, we've managed to do alright! I even think they might ❤️ each other! #babies #furbabies #kidsanddogs #friends

6. When He And Carrie Shared A Sweet Moment On Their Walk

"I'll take the dirt road…it's all I know. I've been walking it for years, it's gone where I need to go…" ❤️

While on a walk together, someone captured this adorable mother-son moment where Carrie kneeled down to Isaiah’s level. So cute!

7.  When He Made His First Public Appearance

Very blessed to have these 2 strong, beautiful and Godly Moms in my life! #happymothersday

Mike Fisher hit the 1,000 NHL game milestone and was honored by his team, the Nashville Predators, with a ceremony before the game. It was as good a time as any for Isaiah to make his very first public appearance and he is even cuter in person!

8. When He Tried To Go To New Zealand With His Mom

So, I may or may not have smuggled the kiddo into New Zealand with me…….ok, I didn't, but maybe I should have because I'm already missing him like crazy! But, I know he's being spoiled right now by his daddy and Nana and Papa. What on earth am I going to do without him for all this time?!?!?!

Carrie accompanied Keith Urban on the Australia/New Zealand leg of his tour in 2017 and had to leave her precious son at home. He almost made it around the globe, though. Climbing into his mom’s suitcase is probably not the safest way to get on an airplane, but we love his determination!

9. When He Did A Belly Flop

Prepare yourselves for saggy diapers and baby laughs because this is one of Isaiah’s cutest moments yet. Mike even told him, “Nice belly flop, buddy,” and you can almost hear him say, “Thank you!”

10. When He Sang With Carrie In The Car

Carrie assisted her son in singing “Jesus Loves Me,” and we will never be the same. He finishes the lyrics and even stays pretty true to the tune!

This isn’t the first time he’s sung along with his famous mama. Take a listen to him singing her hit song “Heartbeat” with her below.

Audio only…my sweet boy singing his little heart out. This is the most beautiful sound in the world!

Carrie has a clothing line called Calia by Carrie Underwood that is sold exclusively at Dick’s Sporting Goods. Her husband took their son there one day and when Isaiah saw a photo of his mama, he had to go give her a big hug. This kid is really too sweet.

12. When He Shared A Special Moment With His Dad During A Hockey Game

These are the moments… @mfisher1212 giving a puck to the little man while Papa holds on tight. #blessed

Carrie isn’t the only one who cheers on #12! Isaiah sat rink-side at a game last year and was given a puck by his dad! Luckily someone captured this incredible moment and Carrie herself shared it!

13. When Mike, Carrie, and Isaiah Had A ‘Typical Thursday Night’

Just a typical Thursday night at the Fisher house…featuring Catboy, Gekko and Owlette! It's time to be a hero! #PJMasks

Since Carrie is a country superstar, and Mike is a hockey star, you’d think their nights would be a little more glamorous – but this is exactly how they like them. On a “typical Thursday night,” the family of three dressed up as characters from one of Isaiah’s favorite shows, PJ Masks!

14. When Isaiah Learned About Noah

In this sweet video, Isaiah named all the animals in his book about Noah and the arc, impressing Carrie’s millions of followers!

While on her Storyteller Tour, Carrie performed one of her songs called ‘What I Never Knew I Always Wanted,” which included never before seen family photos.