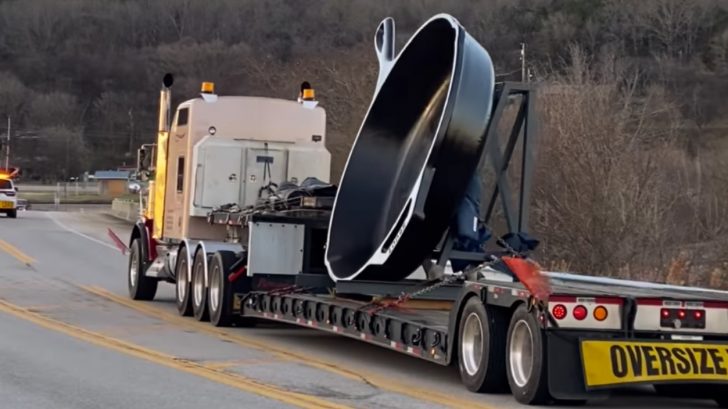 Video footage taken on Wednesday showed a massive semi-truck hauling what officials are calling the world’s largest cast-iron skillet. But where are they taking it?

According to the Lodge Cast Iron shop located in South Pittsburg, it will be going inside their Lodge Cast Iron Museum where guests will get the opportunity to feast their eyes on it when they visit.

The massive clump of steal is a colossal 18 feet long from handle to handle and weighs a whopping 14,360 pounds, making it officially the largest cast-iron skillet on the planet.

The truck spotted on I-59 hauling the skillet was coming from Chattanooga, Tennessee, and heading towards the museum that plans to open in late summer 2022.

Guest who visits the museum will be able to take a closer look at the history behind the cast iron skillet, how it’s made, how it’s used, and the many stories surrounding some of the cast-iron collections at the museum and the southern dishes that were served inside them.

“In 2021, we celebrated 125 years of Lodge Cast Iron, and as we look ahead to 2022 and the next 125 years, we’re thrilled to be bringing the Lodge Cast Iron Museum to South Pittsburg,” CEO and president of Lodge Cast Iron, Mike Otterman told FOX 17 Nashville. “Covering everything from the history of cast iron to how it’s used today, the museum is an exciting opportunity to celebrate our community and share Lodge with the world through this unmatched experience.”

The Lodge Cast Iron shop said that they have been making cast iron cookware at its family-owned foundries in South Pittsburg, Tennessee since 1896.

You can visit the official Lodge Cast Iron website to get more information, or you can watch the video below to see the skillet going down the highway.