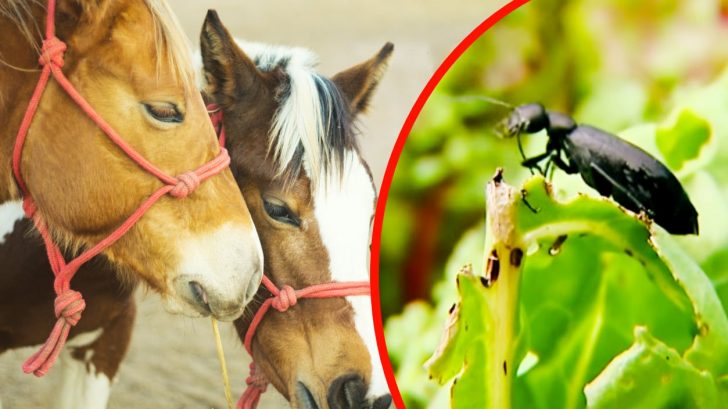 Heavy summer rains and flooding destroyed almost all of the hay Cindy Kanarowski-Peterson grew for her horses at her Red Ridge Ranch Riding Stable in Wisconsin. As a result, she had to order hay from out of state, hoping she’d be able to make it last until the next hay harvest in June 2020.

Cindy told the Wisconsin State Journal that she and her husband, Lyle, paid $40,000 to purchase six semi-tractor-trailer loads full of hay and alfalfa. Their haul came from farms in both South Dakota and Wyoming.

Relieved to have a source of food for her horses, Cindy started feeding her animals with the out-of-state hay and alfalfa. Before long, some of her horses began to fall ill, with Cindy initially believing they had developed colic.

But the horses’ conditions worsened, and some of the animals died after Labor Day. Cindy lost 14 horses in total, with the most recent death occurring on January 3. 100 other horses fell ill, but are now recovering.

So what caused all of this? It turns out the horses were killed by a toxic insect known as a blister beetle.

When crushed, blister beetles release a toxin called cantharidin. Even if beetles are crushed in harvest, the toxin can remain on the hay long afterwards.

Equine veterinarian Dr. Dave Kolb told the Wisconsin State Journal the toxin is “very irritating” to horses’ stomaches and intestines. Since horses are unable to vomit, they also can’t clear their systems of the toxin when they consume it.

“Both of [the horses necropsied] had holes in [their stomachs] and that’s what causes the death,” he said.

Dr. Kolb noted that Cindy’s case marks the first time he has ever dealt with deaths caused by blister beetles in his 32-year career. PJ Liesch, the director of the UW-Madison Insect Diagnostic Lab, told the Wisconsin State Journal that blister beetles are native to Wisconsin, but they usually aren’t found on hay or alfalfa during harvest time.

“In my nearly six years as director of the UW Insect Diagnostic Lab, the recent incident in the state is the only time I’ve encountered an issue with horses and blister beetles. Having multiple horses die is an unusual occurrence,” Liesch said.

Toxic beetles have been blamed for the deaths of 14 horses at a Wisconsin ranch. Another 100 horses were sickened.

The animals ate hay contaminated with the beetles, which release a toxin when they’re crushed. https://t.co/NWRF9GnMF2

Now, Cindy is left to find a new source of hay for her horses within Wisconsin in the dead of winter. Because of this, the cost of the hay is sure to be much higher than what she paid for the out-of-state supply she and Lyle purchased in August.

On top of that, Cindy has mounting vet bills to see to after losing 14 horses and caring for the 100 others who fell ill. A GoFundMe has been established to help Cindy, Lyle, and the horses in this time of need. You can donate to the fund here.

Even though Cindy now knows why she lost her beloved horses, it doesn’t make it any easier for her to cope with their deaths.

“I love horses,” she told the Wisconsin State Journal. “It doesn’t matter what breed, what color, what size. I love them all, but I don’t know if I can ever begin to replace what I lost.”