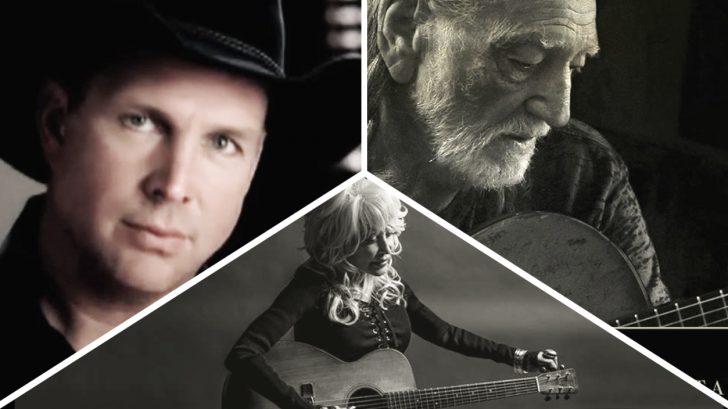 Whether you’re throwing a Halloween party, getting ready for Friday the 13th or just need some haunting backdrop music, we’ve got you covered with this list of the 13 creepiest, crawliest country tunes we could find. You’ll be the talk of the town with this knee-trembling playlist.

When you think of weddings and marriage, you probably think of white dresses and loving vows. Well, for The Band Perry – this wedding day gets a dark twist with their “Better Dig Two.” The video itself has a haunted vibe to it that is something out of a Hitchcock movie – complete with creepy local folk carrying large, dark animals on stakes. If the creative film doesn’t spook you enough, just listen to the lyrics. With her eerie take on “till death do we part” – Kimberly Perry takes the obsessive girlfriend thing to a whole new level.

In this 1962 classic, Marty Robbins is trying to escape the charms of a woman who he has taken as his mistress. His vocals might not sound super-creepy, but it is the lyrics that allude to something sinister going on. His references to being a man trapped by a woman like the ocean will have you thinking of the treacherous mythological sirens that would lure sailors to their doom with their enchanting voices.

Magic potions, spells, curses… one-eyed snakes. This bluesy-bayou tune has it all. The disturbing part of Bobby Bare‘s 1974 hit song is that it was loosely based on a true story and Marie Laveau was a real person. While Bare sings about an ugly witch who hides in the swampy bayou of Lousiana, the real Laveau was a practitioner of voodoo in the French Quarter – and often described as a powerful entrepreneur. There are several differences between reality and entertainment – but once you hear the banshee-like scream in Bare’s song, you’ll never get it out of your head.

The First Lady of Country is known for her quick wit and powerful vocals which go hand-in-hand in this clever song about a lover who is doing wrong but is going to get what he had coming. Loretta Lynn warns the foolish man that he is running with the devil but that one day the devil will collect his dues. Lynn might have released the forewarning tune back in 1967 – but it still rings true to this day.

Alan Jackson brought back black-and-white for this ghostly music video that depicts his spooky run-in with a spirit of country music past. The references throughout the song to Hank Williams’ controversial passing on New Years and his final resting place in Montgomery will send shivers up your spine as you watch Jackson’s supernatural encounter with the legend unfold.

8. “The Thunder Rolls” – Garth Brooks with 3rd verse left out

Just hearing the opening first few strums of his guitar is enough to give you goosebumps. Add rain, a “3:30 in the morning, not a soul in sight” and Garth Brooks in a black cowboy hat – and the whole blood-curdling picture comes together. The song tells of a woman who discovers her husband’s infidelity and the storm inside her grows as strong as the one roaring outside. Brooks originally wasn’t going to include the third part because he felt it was too graphic, which should already tell you something…

When you’ve got an already spooky title, your song and music video have a lot to live up to – luckily, Eric Church worked his magic and created a completely alternate reality full of trapped memories and horrifying characters. His music video reminds you of something out of a western train-robbery film. The gritty details and fiery execution of the film will creep into your dreams long after you watch it.

While Johnny Cash might not have been the only artist to cover this 1948 western, his deep echoing voice adds a sort of foreboding feeling that just needed to be on a spooky song list. Based on an old cowboy legend, the ballad tells of eternally damned cowboys “trying to catch the Devil’s herd across these endless skies.” The song serves as a warning to live life on the straight-and-narrow but the imagery of red-eyed, steel-hooved cattle thundering across the sky will be burned into your brain like a branded memory. A perfect backdrop for any haunted house.

It was hard to pick just one Johnny Cash song. To be honest, you could probably create a whole Halloween playlist based on Cash’s music – but we narrowed it down to two and are pretty dang proud of that. “Long Black Veil” was written in 1959 as a macabre folklore that bleeds a painful truth. Alongside Kris Kristofferson, the legends sing of a man who is condemned for a crime he didn’t commit after not wanting to give his alibi. There is a twist in the story that you have to listen carefully for to understand just who is wearing the long black veil in the story – and it is guaranteed to break your heart.

The Charlie Daniels Band created country’s version of “Thriller” with “The Legend of Wooley Swamp.” Throughout the song, ghouls and ghost seep up in the swamp in their signature style. This is a perfect jam if you are throwing a spooky-themed dance party and need to get the haunts up and swinging around!

What happens when you combine the mountain twang of Dolly Parton and the talented depth of Port Wagoner – pure, legendary magic. In 1968, the two released the duet-packed record, Just the Two of Us. While most of the songs had a sort of pep to them, one stuck out in particular for its gloomy content. “Jeannie’s Afraid of the Dark” chronicles the life of a little girl who cannot sleep without a light on. She eventually passes but the truly creepy part of the song involves what her parents do for her after she is gone…

The Red Headed Stranger punctures your heart with his morbid last request of his gravedigger. Unable to let go of the senses felt in the world, he asks him for one last thing before he is buried in the earth. Willie even adds in a haunting rendition of the children’s rhyme “Ring Around The Rosey,” which is based on the high death toll and people “all falling down” from the Black Plague. This whole song makes your skin crawl – perfect to spook any unsuspecting stranger.

No Halloween is complete without Frankenstein, Wolfman, Zombies, and Dracula – so obviously this list needed to include the song that name-drops them all. Buck Owen‘s classic song is spooky but definitely not scary. So hit play and leave the record running as trick-or-treaters come up to your door for a friendly fright!

Bonus: “The Devil Went Down To Georgia” – Primus Rendition

We love the original Charlie Daniels Band’s version of the song – but it is the wacky claymation in Primus‘ music video that makes it extra creepy! Check it out below to and let us know what you think of our 13 spooky songs – did we miss any of your favorites?