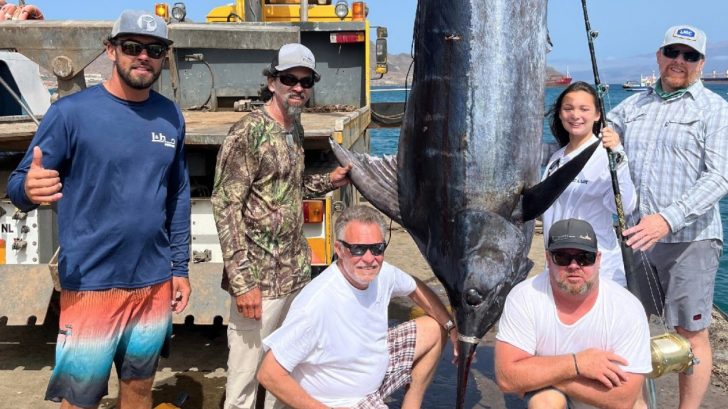 On May 31 (2022), 12-year-old Elizabeth Arn from Panama City Beach, Florida caught a 624-pound marlin off the West Coast of Africa and it’s currently pending to be an International Game Fish Association (IGFA) world record.

Elizabeth traveled with her father, Jonathan, and an all-American crew aboard a 43-foot boat called the Dacia 4,000 miles across the open ocean to specifically attempt to get a world record and did it.

Along with them was captain Randy Baker who drove the boat, Scott Muriwho manned the gaff, and Stephen Hall and Chase Travers served as first and second mate.

The crew said during their day five of fishing near the island nation of Cape Verde, they caught a total of 13 blue marlins and Elizabeth reeled in four of them.

Jordan McCullough who is also from Flordia caught the 549-pounder off the coast of Ghana in 2003 when she was 14 years old and by the time she was 19 years old, she was the youngest angler ever to complete the Royal Billfish Slam.

Elizabeth said she was sitting in a fighting chair using extra-large horse ballyhoo as bait on an 80-pound test line when she hooked onto the blue marlin. For roughly 30 minutes she battled it by herself until she eventually tired it out and reeled it in.

“Elizabeth did an outstanding job pushing the drag up to 25 pounds to ensure the fish [was] hooked solid, then backing off the drag and taking the rod and transferring it to the fighting chair,” Jonathan said, according to Outdoor Life. “This was one of the most challenging parts of catching the fish, no one could assist Elizabeth during the fight. If any of the crew had touched the rod and reel or line during the hookup or fight the catch would have been disqualified by IGFA regulations.”

After they weighed the fish back at the dock and did the paperwork that had to be filed with the IGFA, the crew donated the marlin meat.

They noted that the West Coast of Africa is the best place in the world when it comes to trolling for huge billfish, specifically the eastern Atlantic islands around Cape Verde.

“If you really like fishing for blue marlin, you will eventually travel to the Eastern Atlantic,” her father, Jonathan said. “It’s a journey to get there, but every time you leave the dock you have a chance to catch a fish exceeding 1,000 pounds.”

Watch A Video Below Of A 1000-Pound Marlin Catch