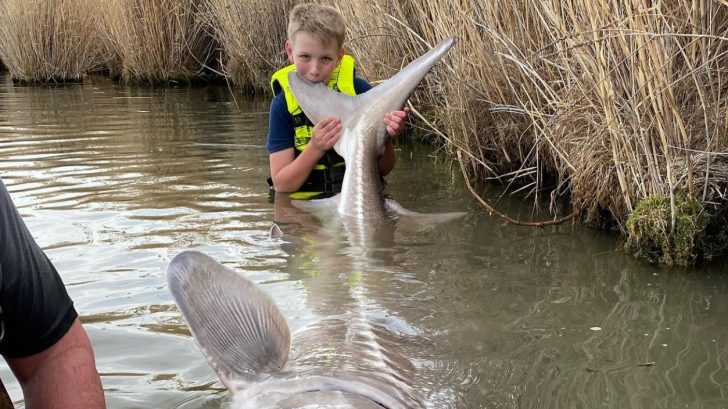 12-year-old Tyler Grimshaw caught a massive nine-foot, 11-inch sturgeon fish out of Idaho’s Snake River near Mountain Home and it was just a half an inch away from beating the current state catch and release record.

The boy, originally from Vernal, Utah caught the nearly 10-foot dinosaur while he was fishing with his father Lance Grimshaw and local guide Joe Weisner, who works for Jones Sport Fishing and exclusively takes people out on the Snake River in southern Idaho to target sturgeon.

“Lance is actually a fishing guide on Flaming Gorge,” Joe explained to KTVB-7 News. “So we kinda go back and forth. I’ll go up with him and fish for a couple days and vice versa. And Tyler has come down to fish with me numerous times. That kid has probably caught 100 sturgeon on his own by now, but he’s always looking for that bigger fish, you know.”

The three, plus five other customers decided to head out on Snake River on March 28 for the afternoon to see if they could have any luck at hooking one of the beautiful creatures.

After getting set up on their first run of the afternoon, Joe said it didn’t take long before Tyler caught a seven-foot sturgeon, which he promptly released back in the river.

Twenty minutes after that, is when he hooked onto the near record-breaker which was leaping out of the water trying to get away.

“As soon as it was hooked it jumped,” Joe said. “And I knew it was a really big fish.”

Joe explained that Tyler was using a standard sliding sturgeon rig and drifting fresh cut bait along the bottom of the river. They also had short, stout rods to make it easier to apply pressure on the fish.

When they hooked onto the sturgeon, Joe said they were in a deep pool that had a very minimal current, which made it a lot easier for Tyler to wear the fish out.

The adults confirmed that Tyler was holding the rod the entire time and brought the fish to the boat all by himself.

“Tyler sat on that rod and pumped that fish for 50 minutes. He wasn’t about to hand that rod over to nobody,” Joe said. “The fish jumped a total of four times. It jumped once right next to the boat—maybe two feet away. It was terrifying.”

After getting it to the surface, they carefully pulled it over to the shallow water and took pictures with it, and measured the giant. It was a whopping 119 inches.

The current state record is 119.5 inches caught in 1908 weighing 675 pounds, only a half an inch away from Tyler’s catch.

Even if Tyler’s fish would have been 120 inches, Idaho regulations require the catch and release record for sturgeon to be broken by at least two inches.

Regardless, Tyler wasn’t heartbroken over it. In fact, he was feeling even more confident that he’ll be reeling in the next state record somewhere in the Snake River sometime soon.

“As soon as I got ahold of that fish, I knew that it was a unique, giant fish,” Joe said. “And if that fish is out there, the current Idaho record can absolutely be broken.”

Watch Video Interview With The Anglers Below