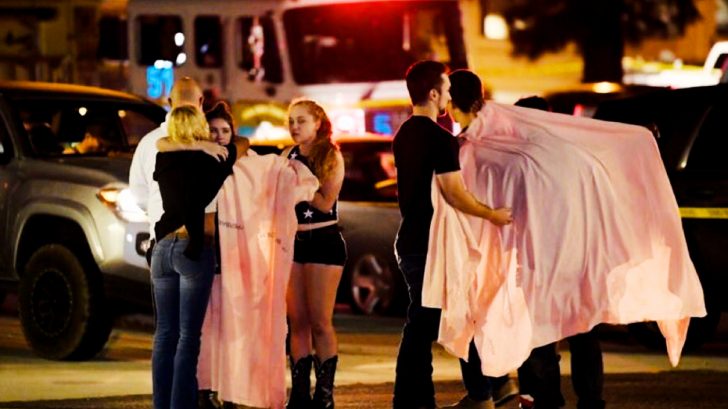 Just after 11:20 p.m., Los Angeles 911 dispatchers were flooded with calls of a mass shooting at a country bar in a suburb of Los Angeles. Responders were there within minutes, but tragically 11 people inside the bar and one heroic sheriff’s sergeant were killed in this horrible attack.

Thousand Oaks is supposed to be a safe place. The Southern California city, where at least 12 people were killed in a shooting Wednesday night at a bar, is known as one of the nation's safest cities https://t.co/I6zyHtJ65M pic.twitter.com/yUkWyybyAL

Thousand Oaks, California – the city where this horrific shooting took place (just barely more than a year after the Route 91 Festival shooting in Las Vegas) is known to be one of the safest cities in the nation.

Another senseless act. 13 dead in another mass shooting. Families devastated by violence. Again. My heart is with the people of Thousand Oaks, and with everyone fighting to make change.

According to a report by local news agency KTLA 5, the 28-year-old gunman opened fire on employees and security personnel first and then turned on the massive crowd of hundreds – people who were there for the bar’s weekly college night just trying to have fun.

The victims of this unspeakable act by a truly evil person were college students from local Pepperdine University, friends, family, neighbors, loved ones, and young adults. They were folks who had plans to go home for the holidays, to graduate next year, to get married. They had their whole lives ahead of them, but it was snatched away in an instant by one person’s cowardly act.

307 mass shootings this year. This is madness. Praying for Thousand Oaks today. But also for #commonsensegunlaws It’s worth trying, yes? ?

A post shared by Kimberly Williams-Paisley (@kimberlywilliamspaisley) on Nov 8, 2018 at 8:58am PST

The sheriff’s sergeant who was killed in the shooting has been named a hero for his selfless act and dedication to saving people’s lives.

JUST IN: President Trump orders American flags lowered to half-staff in the US and around the world "as a mark of solemn respect for the victims of the terrible act of violence perpetrated in Thousand Oaks, California." pic.twitter.com/Ag2jpTmVXA

Sgt. Helus worked with the Ventura County Sheriff’s Office for nearly three decades and was just a year away from retirement when he stepped into the middle of this horrific act and engaged the shooter to keep him from killing more people.

“I told his wife he died a hero,” Ventura County Sheriff Geoff Dean said, choking back tears. “He went in to save lives, to save people.”

Sgt. Ron Helus, a 29-year member of the Ventura County Sheriff's Department, was killed as he tried to save others from a gunman who opened fire at a Thousand Oaks bar. Sheriff Geoff Dean made the heart-breaking announcement at a morning news conference. http://4.nbcla.com/Jb3nLkD

Helus was struck multiple times by gunfire after confronting the shooter and was pulled out of the bar by a responding CHP officer and transported to a hospital where he later succumbed to his injuries.

The thoughts and prayers of the LAPD are with everyone tragically effected by the mass shooting in #ThousandOaks. 11 innocent people senselessly murdered, including @VENTURASHERIFF Sgt Ron Helus who was the 1st deputy on scene and heroically sacrificed his life to save others. pic.twitter.com/dXNgZxE7Tc

“He was willing to sacrifice his life to save others,” Dean said according to NBC Los Angeles. “He ran into danger, he didn’t walk. He ran into danger hoping that he might be able to save someone else’s life. And he made the ultimate sacrifice, but he did it as a hero.”

A night that should've been filled with dancing & laughter turned tragic by senseless violence — our hearts are heavy for the people of Thousand Oaks and everyone affected by the mass shooting at the Borderline Bar, which took 12 lives including @VENTURASHERIFF Sergeant Ron Helus pic.twitter.com/7FmY3kw5mc

Victims have not been named by officials yet, but there has been a hotline established for anyone trying to locate loved ones who may have been in the area last night. The emergency hotline number is (805) 465-6650.

Please share: an emergency hotline has been established for friends and family who are trying to locate loved ones who were at Borderline Bar & Grill in Thousand Oaks — (805) 465-6650

Our hearts are shattered by this senseless act of violence and the 12 souls lost because of it. We are praying for the victims, their families and everyone affected by this.

Update: The Rotary Club of Westlake Village has started a GoFundMe for the victims and their families. If you’d like to donate, click here.