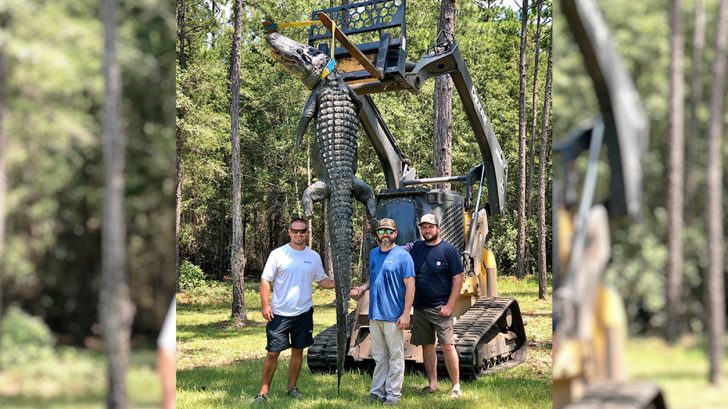 The statewide alligator hunting season in Florida began August 15, 2020 and just hours after it started, three men in Santa Rosa County made an impressive catch.

GATOR SEASON ?: Check out this catch! Three #SantaRosaCounty men caught this alligator early Sunday morning in Marquis Basin. At 12 foot, 7 inches they tell me the gator weighed in at 431 pounds. Hear them tell the story behind this trap coming up on @weartv pic.twitter.com/t2CxgE7Egl

After shooting two harpoons into the beast, hunters Colby Cannon, Bryan Countryman, and Donnie Shear spent about 30-45 minutes wrestling it into their boat.

When they took the gator to a local taxidermist a surprising discovery was made. Shear told Channel 3 News,

“He found a dog tag that was left in the gator’s stomach. We contacted the owner of the dog and found out it went missing 3-4 years ago and then was unfortunately eaten.”

The three hunters went on to explain that they are looking forward to having lots of deep-fried alligator – which is a tasty treat if you’ve never had it before.

While certainly not the biggest alligator, it’s still an impressive catch and this one sets the record for the biggest the hunter trio has ever caught in their eight years of experience.

Channel 3 cautions people that alligator hunting season in Florida runs until November 1st. You must have a permit from the Florida Fish and Wildlife Conservation Commission (FWC) to legally kill an alligator.

For a closer look inside a gator hunt watch the video below.

Caution: Some images may be unsettling for some viewers.