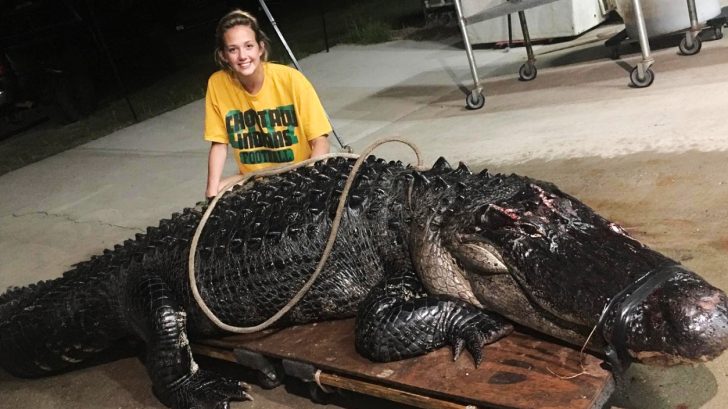 An alligator that weighed in at 463 pounds was found on a highway in Florida in early June 2019.

According to the Miami Herald, Vaughan Gators were called in to trap the “monster gator” from the Monroe Street exit on the I-10. The 12-foot alligator had just survived being hit by a semi-truck, and that only made him mad.

“He wasn’t happy we were trying to remove him,” Broderick Vaughan, owner of Vaughan Gators, said.

Vaughan has been trapping gators for 10 years, and shared that this gator is the third biggest he’s ever seen.

Kelby helping me unload a early morning nuisance alligator. She couldn't pass up a photo op.

You can see just how big he is in the photo above.

A woman named Angie Daniels posted a series of photos on her Facebook from the incident, which Vaughan Gators shared.

“Recieved [sic] a call tonight about an alligator on the exit ramp to Monroe Street. I think to myself ‘yeah, right! It’s probably some tire tread from a semi,'” she wrote. “I send my buddies to check the ‘iguana’ and advise. They get on scene and locate the ‘swamp lizard’. He wasn’t dead either!!”

Just another nuisance alligator call, it’s going to be a busy week.

We sure haven’t ever seen a gator this big before! Have you?