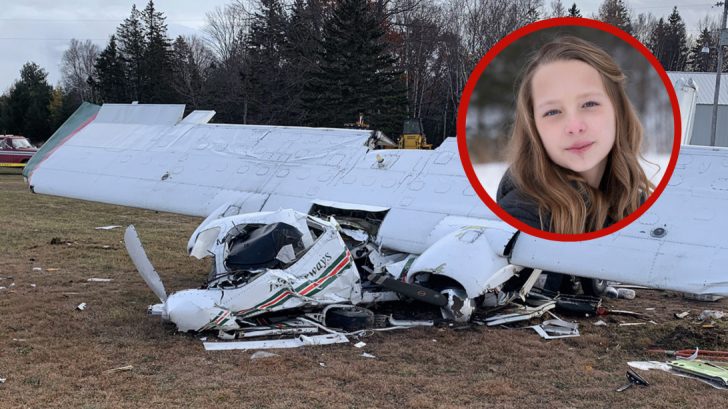 An 11-year-old Michigan girl was the sole survivor of a plane crash that killed four, including her dad. But, the girl is crediting her late dad and his final bear hug with saving her life.

In late November 2021, Laney Perdue was thrilled to be joining her dad, Mike, for a 20-minute flight to Beaver Island in northern Lake Michigan. The pair were going to see family friends and Mike was planning to hunt. Before they left home, the two said goodbye to Laney’s mom, Christie, 8-year-old Addie, and 2-year-old twins Henrik and Bo. The goodbye was one that Christie said she will never forget.

“He gave me this huge hug, let go for a minute and then squeezed me super tight again,” says Christie. “Mike is known for his bear hugs.”

It was one of those precious hugs that would later save Laney’s life. One of the last things Laney remembers before the twin-engine Britton-Norman BN-2 aircraft she and her dad were on crashed was feeling her dad’s arms around her.

Laney was looking out “one of those little windows and seeing the grass and feeling my dad’s arm around me,” she recalled. “I felt this feeling in my stomach like the plane just dropped, and my dad had his feet out like he was bracing for something.”

“The last thing I remember is my dad giving me the tightest hug ever. I’m alive because of him,” Laney said.

The plane crashed three miles away from where it was to land and killed Mike, the pilot William Julian and married couple Kate Leese and Adam Kendall. Miraculously, Laney survived with 11 broken bones and lip and mouth injuries. First responders pulled her from the plane’s wreckage and credited Mike’s final bear hug with protecting Laney from worse injuries.

When Christie was notified about the crash she rushed to her daughter’s side, unsure of whether or not she had survived.

“I grabbed her hand and she squeezed mine,” says Christie.

“I was like, ‘Hey, Mom, where’s Dad?'” says Laney. “I was freaking out because I didn’t know there had been a crash. It was scary.”

“I wanted to make sure he was okay, I kind of knew he had passed, but I wasn’t sure. I just broke down crying,” Laney said of finding out that her dad hadn’t survived the crash.

Laney decided to honor her dad by striving to walk at his funeral. After undergoing surgeries on her jaw and foot, Laney worked to move from a wheelchair to crutches and on December 11, roughly one month after the plane crash, she walked behind her dad’s casket at his funeral.

Hear Laney and Christie Perdue talk about the plane crash in the video below.