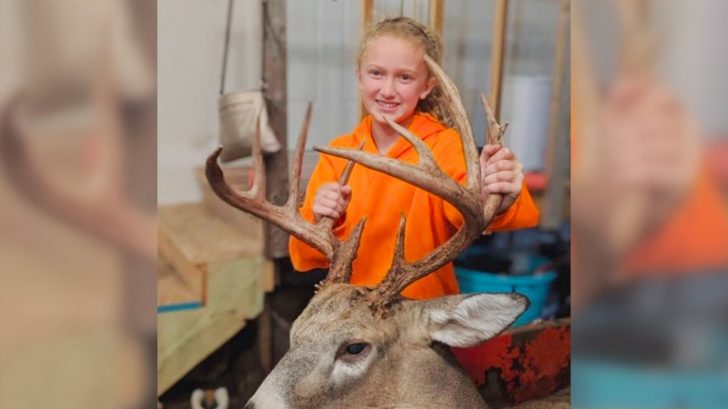 11-year-old Lilly Mickelson had tagged along on hunts many times before. But October 18 was the first time she planned to participate in a hunt. And it was also the night she got her first buck.

Lilly was out hunting with her dad, Luke, in the Chisago City backwoods in Minnesota, ten minutes from their home. She was the one who pointed out a monster buck to her father, who hadn’t even noticed it.

“He didn’t see [the deer] at first, so I had to point it out to him,” Lilly said in an interview with Fox 9 News. “We were both shocked, and we were trying to get a good aim.”

The father-daughter duo waited for two hours before the deer came into plain view. And that’s when they discovered it was a 12-point buck.

Lilly took the shot, and ended up bringing the buck home.

“I couldn’t have been any more proud of her and am still in shock,” Luke told Fox 9 News.

Luke also spoke about how his buddies reacted to the news, saying, “They can’t really believe it, they just kind of sit and laugh when I show them the picture.”

Benji Kohn, a spokesperson with the Minnesota DNR, said he was also stunned to learn about Lilly’s successful first hunt.

Even though people are impressed with the buck she brought home from her first hunt, Lilly remains humble. She chalks it all up to pure luck.

“I just kind of laugh and say well, I just got lucky,” she said.

You can learn more about Lilly’s lucky hunt and the buck she brought home by watching her interview with Fox 9 News below.