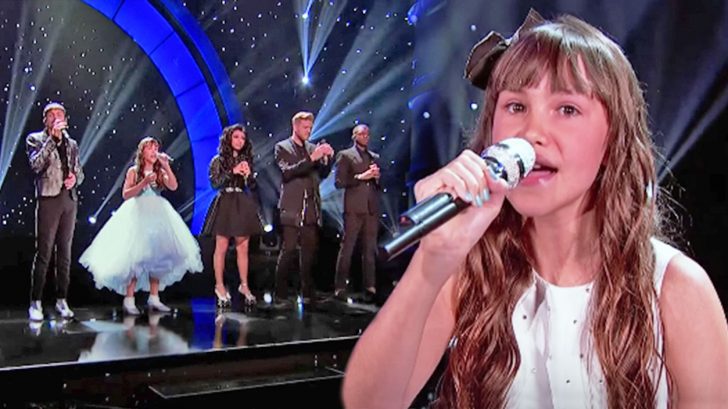 When she was just ten years old, Kaylee Rodgers became an Internet star when she sang lead during a school concert. Performing a Christmas rendition of Leonard Cohen’s iconic song “Hallelujah,” the middle schooler stunned viewers with her angelic voice and her incredible story.

According to her principal, Colin Millar, singing is more than just a hobby for Kaylee – it’s a confidence booster. She has autism and attention deficit hyperactivity disorder (ADHD) and has used her talent to find her voice.

“For a child who came in P4 (7 to 8 years old) and wouldn’t really talk, wouldn’t really read out in class, to stand and perform in front of an audience is amazing. It takes a lot of effort on Kaylee’s part,” Millar said.

Not only did she perform in front of an auditorium full of people in the video that made her a star, she then sang in front of millions on the NBC show Little Big Shots!

She flawlessly sang the first verse, then Grammy Award-winning a cappella group Pentatonix joined her on stage to finish out the chill-inducing song. When all six voices joined together, it was as if the song was meant for them to sing it together.

What an incredible thing music is to give Kaylee a voice she never had and for her to be able to perform on a scale as large as this, despite having autism and ADHD.

Watch their inspiring performance below.