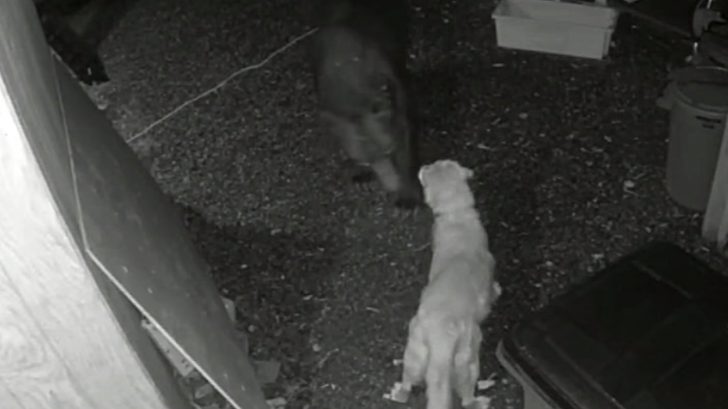 A golden retriever named Pretty gained a lot of respect from his owner and people who saw the video of him protecting his family against a big black bear.

The video showed Pretty standing on his porch guarding the backdoor like a good dog does when a big brown bear came out of the darkness of night and walked onto Pretty’s territory.

The 11-year-old dog didn’t budge as the bear basically walked straight up to the dog, confident, but also cautious. The bear was much bigger than Pretty and understanding that this may not be a friendly bear, he went into protector mode.

The dog started barking, wagging his tail, and fake charging the predatory beast, even as the bear came closer and closer. The two animals sniffed each other and the bear picked up its paw as if it might swipe at the dog but the persistent barking of Pretty made the bear think twice about attacking.

Instead, the bear made its mind up to just retreat back to the safety of the night and it disappeared in the dark. The footage was captured by his home security camera and the homeowner, Nicholas Galanin, who said the incident happened at 11:30pm on August 15 in Sitka, Alaska.

Sitka, Alaska is a small coastal town on Baranof Island in the southeastern part of the state.

Nicholas shared the video of the encounter on Facebook and he told Snopes “We have lots of bears, though I’ve never seen them engage this closely.” Galanin also wrote in the caption of the video that he was considering “changing Pretty’s name to Legend! He’s always been a good bear dog.”

Watch The Video Of The Bear Encounter Below