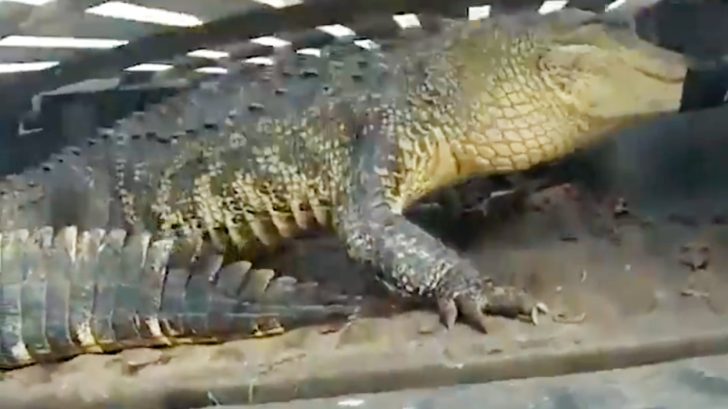 Tampa, Florida authorities were called out to a residential neighborhood due to locals finding a 10-foot alligator hiding underneath a parked car in a parking lot.

Hillsborough County Sheriff’s Office responded to the call and sent several officers and wildlife experts to deal with the situation. Due to the alligator being so big, it was considered a “nuisance animal” and had to be removed from the property.

“Let these Tampa officials show you how to get a 10-foot alligator out from under your car,” ABC News wrote on Twitter.

In the video, you see officers strategically working together to wrangle the animal. Chest cam footage shows the gator on the ground already pulled out from underneath the car with tape wrapped around its mouth.

Four officials grab one of each of the gator’s four legs and pick it up at the same time to lift it off the ground. They then gently walk it a few yards to the back of an animal rescue pickup truck and placed it on the tailgate.

They get him situated and then carefully push him into the truck bed until he’s far enough back to shut the gate.

Take A Look At The Footage Below

Let these Tampa officials show you how to get a 10-foot alligator out from under your car. https://t.co/FaRxO8ZoFf pic.twitter.com/TGkhyHDhXB