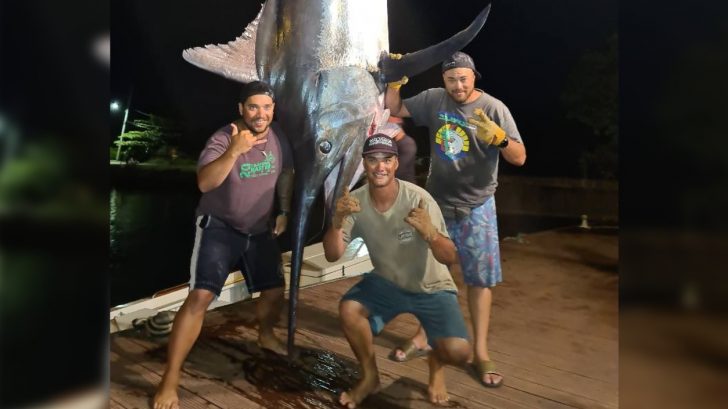 Captain Stephen Pua and other fishermen were fishing for tuna off the coast of Faratea in the pacific ocean when they hooked onto a thousand-pound black marlin.

He said it was about 9am local time when an albacore tuna bit down on their hook. They were in the process of reeling it in when, to their surprise, a 1056-pound black marlin swallowed their tuna. Now they had that sea monster on their line and it was so strong it dove over 2,300 feet into the depths of the ocean before they could stop it.

Stephen and his friend Giovanni Tautu fought the fish for hours until both of them were tired out. It got to the point where they had to call Stephen’s brother Matahi Pua to come help them finish reeling it in. It took the three men the entire day, but they got it.

“And the [fishing] line was made for tuna fishing, so I don’t know how it held up all day,” Stephen said. “We thought we would get it quickly but we only got it at 6 p.m. [local time]. It took 9 hours of fighting with the fish.”

Once they finally pulled it onto the boat, they drove it back to land and it took a backhoe to pick it up off the boat to bring it onto dry harbor. Many people gathered around to take a look and film the creature. One Facebook user named Tiffany Miliani Aimeo posted several photos and videos of when they were unloading the fish. You can view one of those videos below.