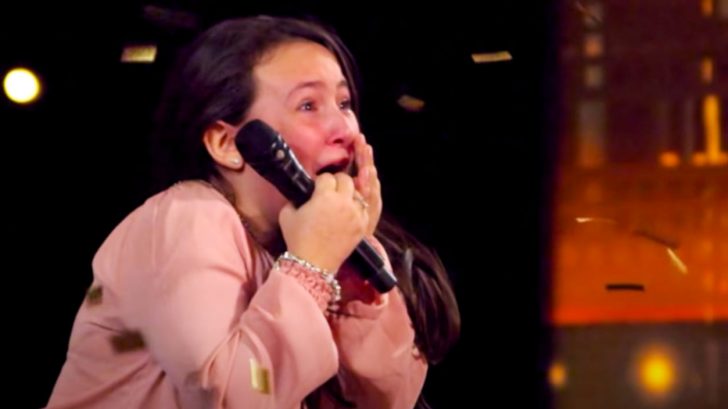 Roberta Battaglia always dreamed of one day getting the chance to audition for America’s Got Talent. Her father, who works as an engineer for a radio station, taught Roberta to love music when she was still just a toddler.

Whenever Roberta’s dad sang at local restaurants, he would bring her along and she’d pick up the microphone to sing with him. With years of performing under her belt, the now ten-year-old Roberta finally got the chance to audition for AGT, and did so during Season 15.

Before she started singing, the AGT judges were already saying how they couldn’t believe Roberta was only ten years old. Judge Heidi Klum remarked that her own ten-year-old daughter, Lou, would never get up on stage in front of so many people.

But even though Roberta had the courage to get on stage, she needed a minute to get over her nerves. She started crying and appeared hesitant to start singing.

The judges comforted her, and Simon Cowell asked if she’d like to have a drink of water first. After host Terry Crews brought her some water and she had a moment to catch her breath, Roberta began singing “Shallow” from the 2018 film A Star is Born.

“Shallow” was performed by Lady Gaga and Bradley Cooper, who played the lead characters in the film. Lady Gaga also co-wrote “Shallow” and served as its co-producer.

The song became a worldwide sensation upon its release, and topped the charts in over 20 countries. It went on to win the Academy Award for Best Original Song, as well as the Golden Globe for Best Original song.

Anyone who has ever heard “Shallow” knows it’s not easy to sing because of how dynamic it is. Whoever tackles “Shallow” needs to have a good range and a solid tone, otherwise their performance won’t come across as powerful as it should.

Thankfully for Roberta, her voice was perfectly suited for the song. She showcased how strong her vocals could be both in the softer, lower moments and in the higher, louder bursts.

Needless to say, the judges were impressed. Once she finished singing, the young girl received a standing ovation from the audience while the judges showered her with compliments.

When Simon said Roberta must have great friends, she tearfully replied that she does, but she still gets picked on sometimes. After Simon offered her some encouraging words about proving those people wrong by being successful, Sofia Vergara shared her commentary.

“It was amazing, it was breathtaking,” she said with a smile. “You’re ten years old, that’s impossible to sing like that at ten years old. And you know what? Let’s see who’s going to bully you after this…“

Roberta couldn’t believe her eyes, and her jaw dropped when she realized what was happening. She had already been crying, but cried even harder as the gold confetti fell around her and Sofia came on stage to give her a hug.

Once you watch Roberta sing “Shallow” in the clip below, you’ll understand why she was so deserving of Sofia’s golden buzzer. This girl is going places, that’s for sure!