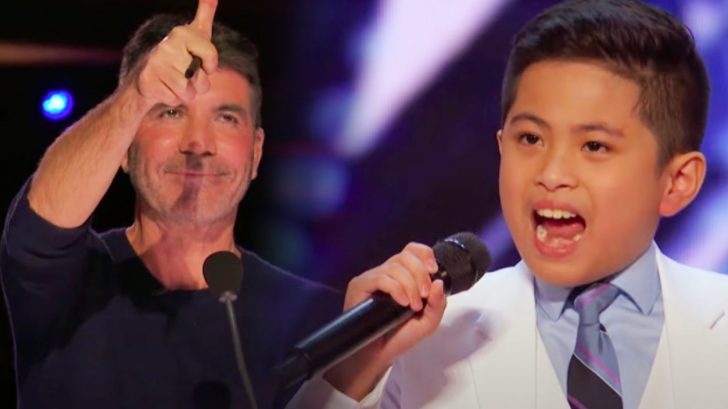 Simon Cowell is notoriously hard to please. As the judge of competition shows such as American Idol and The X Factor, Cowell has never shied away from being brutally honest about what he thinks of a contestant’s talent.

Cowell’s reputation as a tough egg to crack has carried over to America’s Got Talent, which he has judged for six seasons now. He has famously stopped auditions midway through to offer critiques, and makes it crystal clear when he isn’t a fan of what he hears.

Even when he isn’t been harsh, it’s hard to impress Cowell simply due to the fact that he’s been judging competition shows like AGT for so long. He has seen it all.

So anyone who wishes to impress Cowell has to go above and beyond, or have a truly extraordinary talent in order to do so. If a contestant manages to knock Cowell’s socks off, it’s a rare occurrence.

Such an occurrence was showcased during the first episode of AGT‘s 16th season, which aired on June 1. 10-year-old singer Peter Rosalita took to the stage to audition with a cover of Celine Dion‘s “All by Myself.”

The song was first released by Eric Carmen in 1975. Dion released her rendition in 1996, and it was a #1 song on the Hot Adult Contemporary Tracks chart for three weeks.

Since Dion is known as one of the world’s best vocalists, there is always a lot of pressure placed on anyone who dares to cover her songs. Even though Rosalita was feeling nervous about covering “All by Myself” on AGT, it didn’t show once he started singing.

Rosalita sang with power and confidence beyond his years. Viewers who watched his performance were left in disbelief that he is only 10 years old!

The judges were also blown away, including Cowell:

“That was an incredible audition,” Cowell said. “There were parts during that audition which literally gave me goosebumps. You have an amazing voice, an amazing personality, and amazing energy. Everyone is gonna fall in love with you after this audition.”

Watch Rosalita’s impressive AGT audition below. Once you do, you’ll find yourself covered in goosebumps like Cowell was!