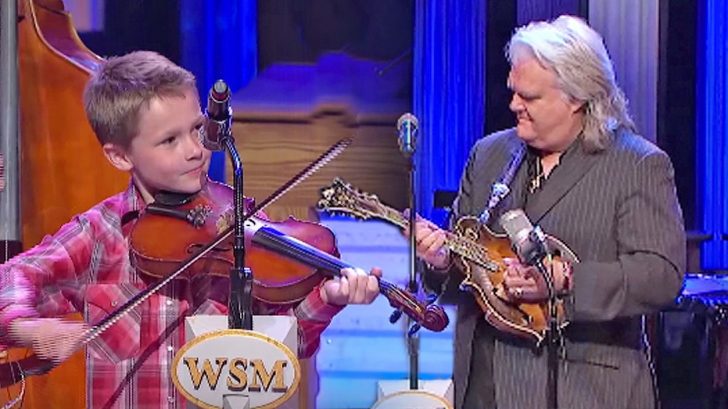 He has appeared on The Tonight Show and caught the attention of country legend Ricky Skaggs, who invited him to perform on the famed Grand Ole Opry stage.

When introducing Peters at the Opry, Skaggs talked about his musical upbringing and love of Bill Monroe. Before they started playing, Skaggs knew Peters had a joke that the world needed to hear.

“Tell the folks the difference in a violin and a fiddle,” Skaggs said.

“A violin has strings, and a fiddle has straangs,” Peters responded with a Southern twang.

The crowd loved it and once the laughter finally died down, Skaggs and Peters began playing Monroe’s “Blue Moon of Kentucky.” The audience was in awe of Peters’ fiddling talent from the get go.

It wasn’t until he started singing that he really blew the audience away. He can sing, he can fiddle, and he’s only 10-years-old?!

Remember the name Carson Peters because he may single handedly help save country music. In fact, in 2016, he made an appearance on Little Big Shots that had people talkin’!

Remember the name Carson Peters because he may single handedly help save country music. He’s now all grown up and regularly plays with his band, Iron Mountain.

Watch his incredible performance below.