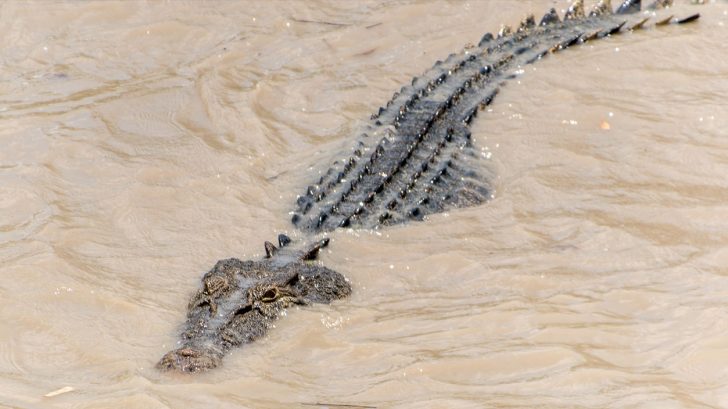 Hurricanes bring on a number of risks in addition to the storm itself. In the aftermath of a hurricane people need to exercise caution in and around floodwaters, hazardous debris, watch out for downed power lines that could potentially be live, and sometimes even be on the lookout for massive alligators.

Another reason to SHELTER IN PLACE until flood waters recede. Not only are there downed power lines, but there’s also displaced wildlife. This 10-12 ALLIGATOR was just outside of a house in Gulf Shores on Plash Island earlier this morning.

And that wasn’t the only gator spotted. Another Florida resident sent in a photo he captured showing a displaced gator outside of his home.

Another issue with flooding is it brings out the creatures and critters! ? ? This was taken yesterday on Sanibel by @NBC2 News viewer Mark Wessler. Be careful walking around flooded areas! pic.twitter.com/JuOkurYoXz

Wednesday morning September 16, 2020, around 4:45 a.m. CDT, the Category 2 hurricane made landfall near the Florida-Alabama line with winds over 100 mph. The rain measured in feet, not inches, swamping homes and trapping people in high water as it slowly made its way inland.

As of now, thousands are left without power near coastal areas of Alabama and the Florida Panhandle region. The metropolitan areas of Mobile, Alabama, and Pensacola, Florida, which have a combined population of almost 1 million were hit especially hard.

Tropical Storm Sally is expected to be a Category 2 #HurricaneSally at landfall near #NewOrleans on Tuesday morning pic.twitter.com/ZDyKEXOSw9

Sally has since weakened to a tropical storm but residents are already preparing for the four more storms that are expected to follow.

THIS IS UNREAL! There are now 5 named storms in the Atlantic Basin right now: #Paulette #Rene #Sally #Teddy #Vicky. There you have it…the forecasters were right about a VERY active hurricane season.

Click the link below for a live tracking of the storm.