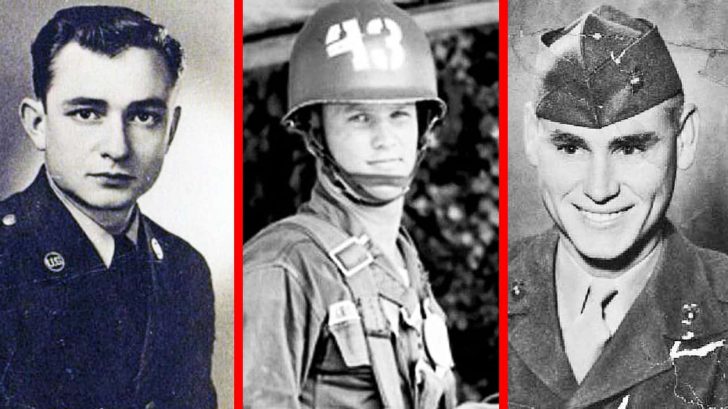 Patriotism is a theme that runs through a large number of country songs, and there’s a good reason. Many of the genre’s popular artists served in the military before they became the country stars we know and love today.

Country music artists represent all branches of the nation’s military: George Strait served in the Army, Johnny Cash was in the Air Force, and George Jones joined the Marines. While country artists have always been great at showing support for our troops, these men, among others, pledged their lives to Uncle Sam.

You may be surprised to see some of the artists’ names on this list! We’d like to thank each and every one of them for their service.

“The Singing Cowboy” was one country artist who actually joined the military after he became famous. Autry was already a country music sensation and major movie star when he decided to enlist in the United States Army in 1942.

During his service, Autry became a tech sergeant in the United States Army Air Corps. He also had a private pilot’s license, and worked toward becoming a military pilot. He ended up serving as a C-109 transport pilot and flew during a dangerous operation over the Himalayas.

After he returned from the Army, Autry continued to dazzle audiences both on stage and on the screen, making him one of the most beloved cowboys of all time.

Did you know “The Possum” was one of many country artists who served our nation?

Jones enlisted in the United States Marine Corps in 1951, and served for a total of two years before he was discharged in 1953. He spent his entire service stationed in San Jose, California.

The future country star recorded his first song a year after his discharge, and the rest is history. He is now regarded as one of the greatest country artists of all time, with classic songs such as “He Stopped Loving Her Today” and “White Lightnin’.”

After attending college for two years, Jamey Johnson dropped out to join the United States Marine Corps. Johnson served in the Marines for a total of eight years, and went on to attain the rank of corporal during his service.

He enjoyed playing music for his fellow marines, who encouraged him to pursue a music career. To this day, Johnson keeps in contact with many of the people he served with during his time in the military.

Johnson started playing country music in bars once he got out of the Marines. When he released his debut album he mentioned his military service in two of the songs.

You may know Josh Gracin as a finalist on the second season of American Idol, but it turns out the “Nothin’ to Lose” singer first served our country as a United States Marine. Gracin was in the Marines when he auditioned for Idol in 2003, and once he finished the show he returned to finish his service.

Instead of joining his fellow Idols on tour after the show, Gracin travelled across the country for a year to promote the Marines and recruit new people to join. After he finished his duties, Gracin was honorably discharged in September 2004.

Since then, Gracin has released numerous hit singles, including “Stay with Me” and “We Weren’t Crazy.”

Before he became one of the most legendary artists in music history, “The Man in Black” served our country in the United States Air Force. He enlisted on July 7, 1950, and was assigned to the U.S. Air Force Security Service at Landsberg, Germany as a Morse Code operator.

Cash’s main responsibility was to intercept Soviet Army transmissions. As a result, he was the first radio operator who picked up the news that Soviet leader Joseph Stalin had passed away.

During his time overseas, Cash established his first band called The Landsberg Barbarians. The musical bug remained with him after his discharge on July 3, 1954, and he made his first records a little less than a year later.

Craig Morgan has always been a huge supporter of our troops, but did you know he was once in the military as well? He served in the United States Army for a total of nine and a half years, and remained in the reserves for six more.

Once he returned home, Morgan worked a series of odd jobs before he finally got his big break into the country music scene. Hit singles such as “That’s What I Love About Sunday” and “Redneck Yacht Club” helped him earn country stardom, and he was invited to join the Grand Ole Opry in 2008.

Today, Morgan continues to show support for our troops by performing at military bases across the country and overseas. He’s also been on countless USO tours, and in 2006 he was awarded the USO Merit Award for everything he does for our troops.

After he graduated high school, a young man by the name of Harold Jenkins was drafted to serve his country in the United States Army. That young man would one day become a major country music star with a different name…Conway Twitty.

Twitty was stationed in the Far East during his military service, but he never forgot about his childhood passion for music. While stationed overseas, Twitty performed in a music group to entertain his fellow soldiers.

Once Twitty returned to the States, he adopted his stage name and took off in pursuit of a career in country music. As you know, that pursuit was a major success.

Kristofferson joined the Army and served for five years, attaining the rank of captain. He was stationed in Germany for a time before returning to the States, where he taught literature at West Point.

Kristofferson’s fellow Highwayman also served our great nation before he became one of country music’s biggest stars. After Nelson left school in 1950, he joined the United States Air Force, in which he served for eight to nine months before he returned home.

Not much is known about Nelson’s time in the military, but a lot is known about his life after he got back from serving his country. He attended Baylor University from 1954-1956, where he studied agriculture.

But Nelson eventually dropped out of college to chase a career in music, and we all know how that went. He’s now regarded as one of the most influential artists not just in country, but all genres.

The entire reason “The King of Country” got his start in music is because of his time spent in the military. In 1971, Strait enlisted in the United States Army, and was stationed at Scholfield Barracks in Hawaii.

During his time in Hawaii, Strait discovered he had a true passion for music. He started performing with an Army-sponsored country band called Rambling Country, which also played off of the base.

Strait was honorably discharged in 1975, and enrolled in college at Southwest Texas State University, where he continued performing in a local country band. He released his first single, “Unwound,” in 1981, and has since earned 61 number one hits.

Once again, we’d like to thank Strait and all of these talented country artists for serving our nation!