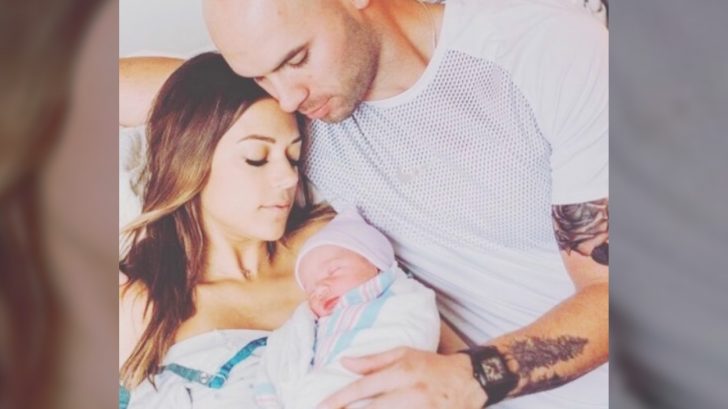 After undergoing IVF and experiencing a series of heartbreaking losses, country music singer/actress Jana Kramer and her husband Michael Caussin welcomed their second child, a son, on November 29. They named him Jace Joseph Caussin, and introduced him to the world through a post Jana made to her Instagram.

“Welcome to the world Jace Joseph Caussin,” Jana wrote. “Our hearts are so full.”

Welcome to the world, Jace Joseph Caussin. Our hearts are so full. Thank you to all of our friends and family..and all of you who have supported Mike and I, and our growing family. We are so blessed, and a huge thank you to @avawomen for helping us grow our family. #rainbowbaby #blessed

In a followup post the next day, Jana explained the meaning behind her baby boy’s name. She said that she and Mike chose the name “Jace” when they learned that it meant “healing.”

Since Jana became pregnant with Jace after such a painful time in her life, she knew that was the perfect name for him.

Jace. My sweet baby boy. When I found out Jace meant “healing” I knew right then that was his name. He has been every bit of healing since I found out we were being blessed with another baby. I love you so much baby boy. #mommasboy. [email protected]

Out & About & Living Her Life

Looking through Jana’s Instagram in the days since she welcomed Jace, you can tell she is overjoyed to now be a mother of two (she and Mike also have a daughter, two-year-old Jolie). Her most recent photos showcase how they’re adjusting as a family of four, and they’re as sweet as can be.

One of the most precious photos shows Jolie snuggled up in the hospital bed with her mama and baby brother, while Mike looks on with a smile.

#Ad Brother, Sister, together as friends, ready to face whatever life sends. Joy & laughter or tears & strife, holding hands tightly as we dance through life (S. Huitt). We’re so blessed & Jolie is over the moon! The last few months would’ve been much harder without Bonjesta® (doxylamine succinate/pyridoxine HCl). It helped manage my #morningsickness when diet & lifestyle changes didn’t work. It’s a safe & effective new formulation of the drug combination I took before that’s made to work faster & longer. It isn’t known if Bonjesta is safe & effective in women with severe nausea & vomiting of pregnancy. Women with this condition may need hospitalization. Most common side effect is drowsiness. See full prescribing information at Bonjesta.com & watch my pregnancy journey. For US Residents Only. WHAT IS BONJESTA? ●Bonjesta is a prescription medicine used to treat nausea & vomiting of pregnancy (NVP) in women who haven’t improved with change in diet/other non-medicine treatments. ●It isn’t known if Bonjesta is safe & effective in women with severe NVP. Women with this condition may need hospitalization. ●It isn’t known if Bonjesta is safe & effective in children under 18. SELECT SAFETY INFORMATION DON’T TAKE BONJESTA IF YOU: ●are allergic to doxylamine succinate, other ethanolamine derivative antihistamines, pyridoxine HCl or any ingredients in Bonjesta (see Patient Information for list of ingredients); ● take monoamine oxidase inhibitors (MAOIs) (ask your healthcare provider or pharmacist if you aren’t sure if you take an MAOI). POSSIBLE SIDE EFFECTS ●The most common side effect of Bonjesta is drowsiness. ●Don’t drive, operate heavy machinery or do other activities that need your full attention unless your HCP says you can. ●Don’t drink alcohol, or take other CNS depressants such as cough & cold medicines, certain pain medicines & medicines that help you sleep while taking Bonjesta. Severe drowsiness can happen or become worse causing falls/accidents. ● Bonjesta may cause false positive urine drug screening test for methadone, opiates & PCP. Report negative side effects of prescription drugs to the FDA at www.fda.gov/medwatch or 1-800-FDA-1088.

But even though Jana just had a baby, she’s already back to work. The other day, she took to Instagram to reveal that she and Mike were going in to the studio to record a new episode of her podcast, Whine Down.

Along with sharing the news of their upcoming podcast episode, Jana shared a photo of the two of them in matching outfits, with both wearing denim jackets and hoods.

Before long, the comments section on Jana’s simple photo of her and Mike’s matching outfits turned into a battleground, as people began body-shaming Jana for the way she looked.

But rather than shame her for looking too heavy, the rude commenters were criticizing Jana for seeming so fit and skinny just one week after giving birth. While most of the shaming comments seem to have been removed or deleted, the main gist was that people were in disbelief that Jana could look as slim as she does now after just having a baby.

Some accused her of getting a tummy tuck, while others credited her ability to “bounce back” to the fact that she’s famous, and therefore must have the money to pay for a dietician or a personal trainer.

Never one to take such things sitting down, Jana took to Instagram the next day to address the shameful comments and shut down the negativity.

First of all, Jana shared that she had originally wanted to post a photo showing what her stomach looks like after having Jace now that she is “on [her] journey back to healthy and [her] goodness.” But she decided to crop the photo so that her stomach was not visible, writing, “It’s amazing the comments and how rude some people can be from my last photo I took yesterday.”

She then lashed out at the body shamers, saying she didn’t get a tummy tuck, doesn’t have a personal chef, and doesn’t work with a fitness trainer every day. Explaining why she may have looked so slim and fit in the photo that got all of the criticism, she wrote:

“In that photo I had on a belly bandit wrapped tightly, and high waisted pants and wow here I am defending myself. Why?!!“

A few things because honestly I’m so frustrated and I need to vent this. I wanted to post this photo (showing my stomach) because I wanted to show my journey back to healthy and my goodness I’m so glad I didn’t which is why this photo is now cropped. It’s amazing the comments and how rude some people can be from my last photo I took yesterday. A few things, no I didn’t get a tummy tuck, no I don’t have a personal chef, no I don’t have fortunes so I didn’t train everyday. Yes I had a c section, yes I am still in pain and on meds but I do have a high pain tolerance. I have had 3 stomach surgeries before this (appendix, gallbladder, and c section).. In that photo I had a belly bandit wrapped tightly, and high waisted pants and wow here I am defending myself. Why?!? If I would have posted the photo of my actual stomach in this photo I would have probably been shamed too even when I was wanting to be vulnerable with my journey. Why do we women have to compare ourselves to each other and then shame?. I say this to myself as much as I say this to y’all…why can’t it be that we are all different. Our bodies are all beautiful and crafted differently, they heal different, they react different, they simply look different. Why do we need to shame someone for not looking a certain way? Or feel bad about ourselves for looking a certain way? Can we be kinder to ourselves and know that every women has a different journey but yet we are all beautiful? Can we lift women up but not tear yourself down in the process with comparing? Let’s give that a try…..I love y’all. Back to my baby.

She then went on to say that if she had decided to post the photo of her stomach as she had intended, she probably would have gotten shamed for that as well.

“Our bodies are all beautiful and created differently, they heal different, they react different, they simply look different,” she wrote. “Why do we need to shame someone for not looking a certain way?“

Those are some strong words…

We’re sorry that Jana had to deal with something as awful as this, but knowing how strong she is, we know that she won’t let anything bring her down!